We have been talking about Novak lately because he is totally at the top of the tennis game right now. We congratulate him for his recent wins. You must know that Djokovic and all the pro players choose to have a wide base on the ground. In today’s article we are going to cover all the essentials related to the open stance technique.

Let us first understand what an open stance is. Open stance means hitting open and not stepping in towards the ball. The player has to use his rotational power to strike the ball. So, simply put, in an open stance you do not step forward, you keep your legs in a straight line kind of position and rotate your hands and waist sideways to hit the ball. Novak uses a lot of open stance in both his forehand shots as well as backhand shots.

#Why should you be choosing open option ground stroke? : We have discussed earlier that core plays a very important role in any shot of tennis game. When you take a cross over step or come forward for a traditional step, your core gets locked up. And when your core gets locked up the executed shot comes out as a very weak, energy-less shot. All your body parts must be working towards a great shot, if even one of them gets locked; it affects the shot in a bad way. 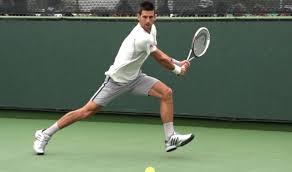 #What should you do for a proper open stance? :

All the pro players are choosing to use an open stance base because of the discussed benefits. We at Crunch Time Coaching aim to drag your attention to every little thing, technique, trick which might help you to take the ladder to reach the top. Start practicing open stance because it is an outstanding technique in the modern tennis. For more queries on open stance or other specific problems you can write us at crunchtimecoahing@gmail.com