One can say this without a shadow of a doubt, that Topspin is a king in the modern game of Tennis today. Topspin is a primary yet the most valuable tool a player needs to have in his bag. Topspin has made many eminent players win big titles. Rafael Nadal, Roger Federer, Serena Williams can be named as the best examples of the Topsin Forehand players.

Topspin makes the ball arch a little higher over the net and to get dropped at a shorter distance without going too far. And it also dodges your opponent as it jumps higher after a bounce and then spins which lets the ball to go directly at the baseline, this spin compels the opponent to make a change in the position at the end time, hence gets him off balance for a strong return. Topspin forehand is also a safe shot as it makes you perform a rally without making many errors. Great topspin forehand gives great consistency to a player.

If topspin is something you have struggled with in the past, then you must religiously follow this article. This article will tell you how to consistently add massive amounts of topspin to your forehand. This drill works every time, and is called the ‘3x Topspin Drill’. The drill works as a charm. To start with, you need tennis balls and nothing more than that, yes, you don’t even need your racquet initially. The machine for topspin is your hand and racquet is the tool. 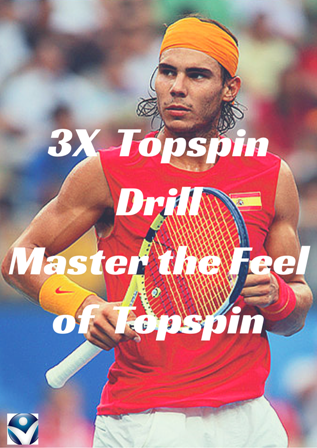 Steps involved in the drill:-

To summarize, first scarp the ball 3 times in 3 sets, then scrape/rub twice and at let it go at the 3rd time, then in the last, just scrap and let go in one hit only. The drill does not ask for a lot of time of yours and is not at all laborious. It is an easy and fun drill which will help you master topspin in your forehand. Aim big and keep learning amazing techniques effortlessly with Crunch time coaching.